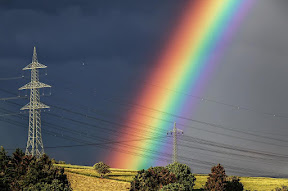 and it shall be for a token of a covenant

between me and the earth.

The rainbow, is GOD's rainbow.

Used, according to His purpose.

ONE, as testimony of His covenant with Noah, and his sons.

In total contrast to how the world is using it now.

Here's what the Bible says:

8 And God spake unto Noah,

and to his sons with him, saying,

I establish my covenant with you,

and with your seed after you;

10 And with every living creature that is with you,

and of every beast of the earth with you;

from all that go out of the ark,

to every beast of the earth.

11 And I will establish my covenant with you,

neither shall all flesh be cut off any more by the waters of a flood;

neither shall there any more be a flood to destroy the earth.

This is the token of the covenant which I make

between me and you and every living creature that is with you,

and it shall be for a token of a covenant

between me and the earth.

when I bring a cloud over the earth,

that the bow shall be seen in the cloud:

15 And I will remember my covenant,

which is between me and you and every living creature of all flesh;

and the waters shall no more become a flood to destroy all flesh.

16 And the bow shall be in the cloud;

and I will look upon it,

that I may remember the everlasting covenant

between God and every living creature of all flesh

that is upon the earth.

This is the token of the covenant,

which I have established between me

and all flesh that is upon the earth.

TWO, in reflection of His GLORY.

As shown in prophet Ezekiel's vision:

in the day of rain,

so was the appearance of the brightness round about.

This was the appearance of the likeness of the glory of the Lord.

And when I saw it,

I fell upon my face,

and I heard a voice of one that spake.

As shown on this third verse:

10 And I saw another mighty angel come down from heaven,

clothed with a cloud:

and a rainbow was upon his head,

and his face was as it were the sun,

and his feet as pillars of fire:

2 And he had in his hand a little book open:

and he set his right foot upon the sea,

and his left foot on the earth,

3 And cried with a loud voice,

as when a lion roareth:

and when he had cried,

4 And when the seven thunders had uttered their voices,

I was about to write:

and I heard a voice from heaven saying unto me,

Seal up those things which the seven thunders uttered,

and write them not.

Beware how we use the rainbow.

The rainbow is GOD's rainbow.

It is sacred to the LORD.

Believers abide by that. 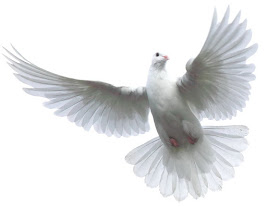