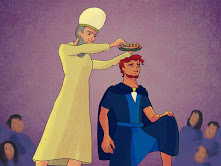 14 But now thy kingdom shall not continue:

the Lord hath sought him a man after his own heart,

and the Lord hath commanded him

to be captain over his people,

because thou hast not kept that

which the Lord commanded thee.

What causes a man to sin?

What are the consequences?

David, anointed of God, became king of Israel, and thus, destined to become a great king.

But one day, he lusted after Bathsheba, and they bore a child, while she was still married to Uriah, the Hittite.

Evil grew in David's adulterous heart, and he arranged to have her husband killed in battle.

14 And it came to pass in the morning,

that David wrote a letter to Joab,

and sent it by the hand of Uriah.

15 And he wrote in the letter,

in the forefront of the hottest battle,

and retire ye from him,

that he may be smitten,

The command was to position Uriah in the forefront, to abandon him, and to let him be killed in the midst of battle.

As expected, Uriah's life was sacrificed, without his knowing.

and fought with Joab:

and there fell some of the people of the servants of David;

and Uriah the Hittite died also.

It was truly an abomination in the sight of God, what David did, for Uriah was a faithful soldier.

When urged by the king to seek comfort in his own home, to be with his wife, Uriah did differently.

Of course, we all know by now that David wanted to cover up Bathsheba's pregnancy.

He wanted it pinned on Uriah.

Could an anointed really do this?

Apparently, David, in his greed, lust, and abuse of power, did.

But here's how the faithful Uriah responded.

11 And Uriah said unto David,

and my lord Joab,

and the servants of my lord,

are encamped in the open fields;

shall I then go into mine house,

to eat and to drink,

and to lie with my wife?

and as thy soul liveth,

I will not do this thing.

26 And when the wife of Uriah heard

that Uriah her husband was dead,

she mourned for her husband.

27 And when the mourning was past,

David sent and fetched her to his house,

and she became his wife,

and bare him a son.

But the thing that David had done

What were the consequences of David's many sins against God, Uriah, and the people of Israel?

That will be for the next post, for the LORD sent a prophet to rebuke David's terrible deeds.