When GOD decides on a KING 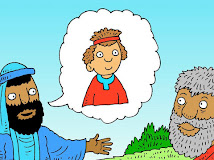 16 And the Lord said unto Samuel,

How long wilt thou mourn for Saul,

seeing I have rejected him

from reigning over Israel?

I will send thee to Jesse the Bethlehemite:

for I have provided me a king

When people decide on a king -- without God's anointing -- disaster ensues.

Such as when He chose David, the shepherd boy, the one laughed at and set aside by his older brothers.

But it was a tricky thing, for prophet Samuel had not seen Saul, after the latter's failed kingship.

if Saul hear it,

he will kill me.

And the Lord said,

Take an heifer with thee,

I am come to sacrifice to the Lord.

3 And call Jesse to the sacrifice,

and I will shew thee what thou shalt do:

and thou shalt anoint unto me him

whom I name unto thee.

Samuel works the plan, and goes to Bethlehem.

4 And Samuel did that which the Lord spake,

and came to Bethlehem.

And the elders of the town trembled at his coming,

I am come to sacrifice unto the Lord:

and come with me to the sacrifice.

And he sanctified Jesse and his sons,

and called them to the sacrifice.

when they were come,

that he looked on Eliab,

Surely the Lord's anointed is before him.

7 But the Lord said unto Samuel,

Look not on his countenance,

or on the height of his stature;

because I have refused him:

for the Lord seeth not as man seeth;

for man looketh on the outward appearance,

but the Lord looketh on the heart.

and made him pass before Samuel.

Neither hath the Lord chosen this.

9 Then Jesse made Shammah to pass by.

Neither hath the Lord chosen this.

Jesse made seven of his sons to pass before Samuel.

And Samuel said unto Jesse,

The Lord hath not chosen these.

Befuddled, Samuel wondered if there were any more sons.

11 And Samuel said unto Jesse,

Are here all thy children?

There remaineth yet the youngest,

he keepeth the sheep.

And Samuel said unto Jesse,

Send and fetch him:

for we will not sit down till he come hither.

and brought him in.

Now he was ruddy,

and withal of a beautiful countenance,

and goodly to look to.

And the Lord said,

for this is he.

13 Then Samuel took the horn of oil,

and anointed him in the midst of his brethren:

and the Spirit of the Lord came upon David

from that day forward.

So Samuel rose up,

and went to Ramah.

Thing is, when God's Spirit came upon the future king, it left the present king.

14 But the Spirit of the Lord departed from Saul,

and an evil spirit from the Lord troubled him.

That's what happens when God withholds His power from you.

God ALLOWED His ungrateful people to have a king -- in Saul -- not chosen by the Lord.

Even as the Lord bore their rejection.

In the process, they suffered greatly for it.

Now, GOD chose His OWN king.

A king who would rule greatly, even as he sinned, too, at one point.

Nevertheless, God's instructions to His prophet Samuel, delivered to Saul, was fulfilled.

14 But now thy kingdom shall not continue:

the Lord hath sought him a man after his own heart,

and the Lord hath commanded him

to be captain over his people,

because thou hast not kept that which the Lord commanded thee.

David was the one prophesied "after God's heart".

Don't you LOVE the WAYS of the LORD?

Leviticus 19:31 King James Version 31 Regard not them that have familiar spirits,  neither seek after wizards,  to be defiled by them:  I ... 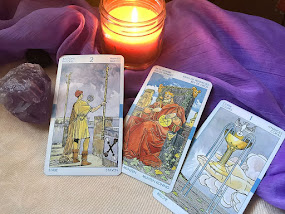