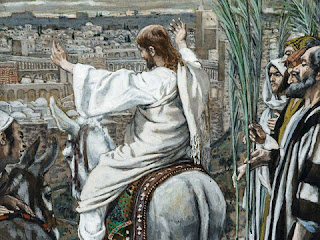 Why did the LORD JESUS weep over Jerusalem?

Finally, I will get the story right.

Of how Jesus ascends Jerusalem, reaches the Mount of Olives, asks for a fresh colt to ride on, and descends, in triumph, greeted by a multitude, who rejoice and praise the King sent by God.

Here's the remarkable account of that Palm Sunday the Holy Spirit led me to.

28 And when he had thus spoken,

ascending up to Jerusalem.

when he was come nigh to Bethphage and Bethany,

he sent two of his disciples,

Go ye into the village over against you;

in the which at your entering ye shall find a colt tied,

and bring him hither.

Why do ye loose him?

thus shall ye say unto him,

Because the Lord hath need of him.

32 And they that were sent went their way,

and found even as he had said unto them.

33 And as they were loosing the colt,

the owners thereof said unto them,

Why loose ye the colt?

The Lord hath need of him.

35 And they brought him to Jesus:

and they cast their garments upon the colt,

and they set Jesus thereon.

they spread their clothes in the way.

even now at the descent of the mount of Olives,

the whole multitude of the disciples began to rejoice

and praise God with a loud voice

for all the mighty works that they had seen;

Blessed be the King that cometh

in the name of the Lord:

and glory in the highest.

39 And some of the Pharisees from among the multitude

40 And he answered and said unto them,

I tell you that,

if these should hold their peace,

the stones would immediately cry out.

If thou hadst known,

at least in this thy day,

the things which belong unto thy peace!

but now they are hid from thine eyes.

43 For the days shall come upon thee,

that thine enemies shall cast a trench about thee,

and compass thee round,

and keep thee in on every side,

44 And shall lay thee even with the ground,

and thy children within thee;

and they shall not leave in thee one stone upon another;

because thou knewest not the time of thy visitation.

45 And he went into the temple,

and began to cast out them that sold therein,

and them that bought;

My house is the house of prayer:

but ye have made it a den of thieves.

47 And he taught daily in the temple.

But the chief priests and the scribes

and the chief of the people sought to destroy him,

for all the people were very attentive to hear him.