JESUS heals on a SABBATH 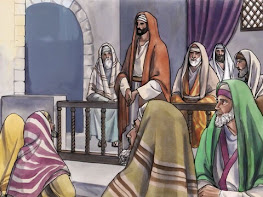 7 And the scribes and Pharisees watched him,

whether he would heal on the sabbath day;

The lovely thing about Jesus, is that He continually confounds His challengers, especially the Pharisees, and scribes.

Such as the day He healed on a Sabbath.

10 And he was teaching in one of the synagogues on the sabbath.

there was a woman which had a spirit of infirmity eighteen years,

and was bowed together,

and could in no wise lift up herself.

he called her to him,

and said unto her,

thou art loosed from thine infirmity.

and immediately she was made straight,

Of course, this was exactly the opportunity the Pharisees were waiting for.

14 And the ruler of the synagogue answered with indignation,

because that Jesus had healed on the sabbath day,

and said unto the people,

There are six days in which men ought to work:

in them therefore come and be healed,

and not on the sabbath day.

15 The Lord then answered him,

doth not each one of you on the sabbath loose his ox or his ass from the stall,

and lead him away to watering?

16 And ought not this woman,

being a daughter of Abraham,

be loosed from this bond on the sabbath day?

17 And when he had said these things,

all his adversaries were ashamed:

and all the people rejoiced for all the glorious things that were done by him.

Let Scripture give us another instance wherein Jesus healed on a Sabbath.

as he went into the house of one of the chief Pharisees to eat bread on the sabbath day,

that they watched him.

there was a certain man before him which had the dropsy.

We know what Jesus would do.

For He loved people.

He was in service to God.

So, He does what comes naturally to His heart.

Nevertheless, the Lord asks His critics:

3 And Jesus answering spake unto the lawyers and Pharisees,

Is it lawful to heal on the sabbath day?

No answer was forthcoming, so Jesus healed the man.

4 And they held their peace.

And he took him,

and let him go;

After which, Jesus pointed out something.

Which of you shall have an ass or an ox fallen into a pit,

and will not straightway pull him out on the sabbath day?

It seems, the "ass and ox" reasoning did wonders to their thinking.

They got the Lord's point.

6 And they could not answer him again to these things.

JESUS has the last word on the SABBATH:

The sabbath was made for man,

and not man for the sabbath:

28 Therefore the Son of man is Lord also of the sabbath.

He is the fulfillment of Scripture.

His critics never stood a chance.

WHEN is the SABBATH?