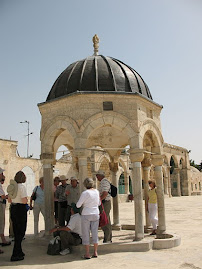 and in that time,

when I shall bring again the captivity of Judah

2 I will also gather all nations,

and will bring them down

into the valley of Jehoshaphat,

and will plead with them there for my people

and for my heritage Israel,

whom they have scattered among the nations,

and parted my land.

Why is Jerusalem so loved by God?

These defining verses from GOD explain it all.

5 Since the day that I brought forth my people

out of the land of Egypt

I chose no city among all the tribes of Israel

to build an house in,

neither chose I any man to be a ruler over my people Israel:

6 But I have chosen Jerusalem,

and have chosen David

to be over my people Israel.

That was really stunning to know, and I'm glad the Holy Spirit led me to it.

He helped me find these, too.

Let us go into the house of the Lord.

2 Our feet shall stand within thy gates,

3 Jerusalem is builded as a city

that is compact together:

4 Whither the tribes go up,

the tribes of the Lord,

unto the testimony of Israel,

to give thanks unto the name of the Lord.

5 For there are set thrones of judgment,

the thrones of the house of David.

6 Pray for the peace of Jerusalem:

they shall prosper that love thee.

7 Peace be within thy walls,

and prosperity within thy palaces.

8 For my brethren and companions' sakes,

I will now say,

Peace be within thee.

I will seek thy good.

2 As the mountains are round about Jerusalem,

so the Lord is round about his people

from henceforth even for ever.

62 For Zion's sake will I not hold my peace,

and for Jerusalem's sake I will not rest,

until the righteousness thereof

go forth as brightness,

and the salvation thereof

as a lamp that burneth.

3 Thou shalt also be a crown of glory

in the hand of the Lord,

and a royal diadem

in the hand of thy God.

6 I have set watchmen upon thy walls,

which shall never hold their peace day nor night:

ye that make mention of the Lord,

and till he make Jerusalem

a praise in the earth.

17 At that time they shall call Jerusalem

the throne of the Lord;

and all the nations shall be gathered unto it,

to the name of the Lord,

neither shall they walk any more

after the imagination of their evil heart.

I am returned unto Zion,

and will dwell in the midst of Jerusalem:

and Jerusalem shall be called a city of truth;

and the mountain of the Lord of hosts

many people and strong nations shall come

to seek the Lord of hosts in Jerusalem,

and to pray before the Lord.

23 Thus saith the Lord of hosts;

In those days it shall come to pass,

that ten men shall take hold out

of all languages of the nations,

even shall take hold

of the skirt of him that is a Jew,

We will go with you:

for we have heard that God is with you.

I will make Jerusalem a cup of trembling

unto all the people round about,

when they shall be in the siege

both against Judah and against Jerusalem.

3 And in that day will I make Jerusalem

a burdensome stone for all people:

all that burden themselves with it shall be cut in pieces,

though all the people of the earth

be gathered together against it.

6 In that day will I make the governors of Judah

and like a torch of fire in a sheaf;

and they shall devour all the people round about,

on the right hand and on the left:

and Jerusalem shall be inhabited again

in her own place,

7 The Lord also shall save the tents of Judah first,

that the glory of the house of David

and the glory of the inhabitants of Jerusalem

do not magnify themselves against Judah.

8 In that day shall the Lord defend

the inhabitants of Jerusalem;

and he that is feeble among them at that day

shall be as David;

and the house of David shall be as God,

as the angel of the Lord before them.

9 And it shall come to pass in that day,

that I will seek to destroy all the nations

that come against Jerusalem.

10 And I will pour upon the house of David,

and upon the inhabitants of Jerusalem,

the spirit of grace and of supplications:

and they shall look upon me

whom they have pierced,

and they shall mourn for him,

as one mourneth for his only son,

and shall be in bitterness for him,

as one that is in bitterness for his firstborn.

11 In that day shall there be a great mourning

as the mourning of Hadadrimmon

in the valley of Megiddon.

3 Then shall the Lord go forth,

and fight against those nations,

as when he fought in the day of battle.

4 And his feet shall stand in that day

upon the mount of Olives,

which is before Jerusalem on the east,

and the mount of Olives shall cleave

in the midst thereof toward the east

and toward the west,

and there shall be a very great valley;

and half of the mountain

shall remove toward the north,

and half of it toward the south.

4 But in the last days it shall come to pass,

that the mountain of the house of the Lord

shall be established in the top of the mountains,

and it shall be exalted above the hills;

and people shall flow unto it.

2 And many nations shall come,

and let us go up to the mountain of the Lord,

and to the house of the God of Jacob;

and he will teach us of his ways,

and we will walk in his paths:

for the law shall go forth of Zion,

and the word of the Lord from Jerusalem.

If thou hadst known,

at least in this thy day,

the things which belong unto thy peace!

but now they are hid from thine eyes.

43 For the days shall come upon thee,

that thine enemies shall cast a trench about thee,

and compass thee round,

and keep thee in on every side,

44 And shall lay thee even with the ground,

and thy children within thee;

and they shall not leave in thee one stone upon another;

because thou knewest not the time of thy visitation.

20 And when ye shall see Jerusalem

then know that the desolation thereof is nigh.

21 Then let them which are in Judaea flee to the mountains;

and let them which are in the midst of it depart out;

and let not them that are in the countries enter thereinto.

22 For these be the days of vengeance,

that all things which are written may be fulfilled.

23 But woe unto them that are with child,

and to them that give suck,

for there shall be great distress in the land,

and wrath upon this people.

24 And they shall fall by the edge of the sword,

and shall be led away captive into all nations:

and Jerusalem shall be trodden down

until the times of the Gentiles be fulfilled.

45 Then opened he their understanding,

Thus it is written,

and thus it behooved Christ to suffer,

and to rise from the dead the third day:

47 And that repentance and remission of sins

should be preached in his name

1 The former treatise have I made,

of all that Jesus began both to do and teach,

2 Until the day in which he was taken up,

after that he through the Holy Ghost

had given commandments unto the apostles

whom he had chosen:

3 To whom also he shewed himself alive after his passion

by many infallible proofs,

being seen of them forty days,

and speaking of the things pertaining to the kingdom of God:

being assembled together with them,

that they should not depart from Jerusalem,

but wait for the promise of the Father,

ye have heard of me.

5 For John truly baptized with water;

but ye shall be baptized with the Holy Ghost

not many days hence.

6 When they therefore were come together,

they asked of him, saying,

wilt thou at this time restore again

the kingdom to Israel?

7 And he said unto them,

It is not for you to know the times or the seasons,

which the Father hath put in his own power.

8 But ye shall receive power,

after that the Holy Ghost is come upon you:

and ye shall be witnesses unto me both in Jerusalem,

and in all Judaea,

and unto the uttermost part of the earth.

9 And when he had spoken these things,

he was taken up;

and a cloud received him out of their sight.

The next post is on the young JESUS in Jerusalem.